The Becker BE4716 & BE4715 CD/Radio/Sat-Nav are stylish systems factory fitted to several Mercedes models. Owners often like to retain the original units. A code-locked unit can usually be decoded from the serial number of the set.

The serial number can be found on the chassis of the radio and will look similar to BE471621030360 (starts with 'BE' and the model number of the unit, 14 digits in total). So the first thing is to pull the radio from the dashboard enough to be able to read the label. 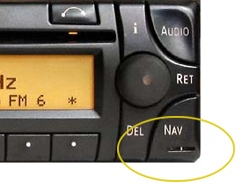 You will need a pair of car radio removal keys. These 'flat keys' (like those shown below - make sure you buy the right ones, these are flat, not round prongs) are inserted into the horizontal cut-outs low down on either side of the front panel (see the photos to the left, showing the position of one of the key release holes - not always easy to see if you don't know where to look!). When inserted as far as they seem to go, the keys will push the internal spring clips back against the chassis, allowing you to draw the radio out. If the clips inside have released, it should slide free without much effort.

If in any doubt about which numbers to send us, simply send us all that you find on there.

After we have sent you your unlock code, switch the radio on and the display itself will show numbers relating to the buttons along the lower edge of the screen. Enter the supplied code using the radio station preset buttons. 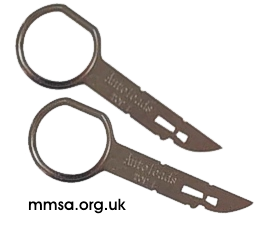 After entering the last number of the code, press the 'fwd' or 'rev' buttons (marked >> / <<) to enter the code and the unit should burst into life.

Many models of radio have an automatic 'temporary lock' feature that will lock out any further code entry attempts if too many are attempted. The screen will often display 'WAIT' or 'CODE'. For this reason, do not try to guess the code, and enter the code we send you carefully. Most radios will exit the temporary lock state after an hour or so of leaving the radio powered on, sometimes up to 2 hours.

In some cases, further unsuccessful attempts will cause the radio to permanently lock, and in those cases only a physical reset of the code (on a service workbench) will get it going again.